Los Pericos (Argentina) Celebrating 25 years of Latin dub, reggae and rock + King Konga Soundsystem this 30th June in London part of Fuerza London latin music festival and the promotional support of Latinos in London ™. Latinos in London team have 10 tickets to give away just answer the question to our easy competition thank to Fuerza London Festival.

THIS COMPETITION IS CLOSED
About Los Pericos, What's the name of the album which caused a surge of popularity across Latin America countries chartering successfully with songs like Me Late, Waitin, Hace Lo Que Quieras.
Send us your contact details with the answer to info@latinosinlondon.com

Keep updated via our networks and our radio show every tuesday at 6pm on www.aculcoradio.com/envivo 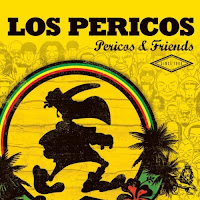 In 1986 a group of friends who used to get together to play music, became LOS PERICOS, the first reggae rock band in Argentina. Their first record, “LOS PERICOS” released in 1988 was the best selling album of the year, obtaining Triple Platinum Award for its 180 thousand units sold. One year later, they recorded KING KONG, produced by Herbert Vianna (Os Paralamas do Sucesso). Immediately after, they launched Maxi ANFITREU, a vinyl disc that impacted because of its unique style.
www.pericos.com

Powered by LATINOS IN LONDON